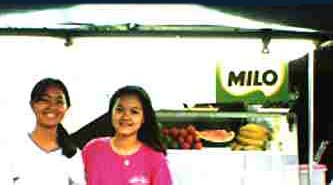 Milo girls. Right in the heart of the Pattani night market you'll find these two young ladies making killer iced fuit shakes. I had two in a row and came back for more later.

If it's Milo you want, you'll need to say 'My-loh!', as in 'Tally Ho!'. Thai being a tonal language you've gotta get the inflection right, otherwise you might be standing there saying 'Milo', pointing at the sign, making drinking motions, and they'll look at you blankly. 'Why's that farang pointing at the My-loh! sign and grunting?' they think.

The girl on the right attends the local college and speaks good English.