To the ride: Thailand: North to ChiangMai
To 'nutting out the Thais': My bike's on fire!

I am not a baboon!

Mr Pumpy's handy tips for beginner farangs in Thailand
'Farang' is the Thai term for 'foriegner'. It supposedly comes from the Thai mangle of the word 'French'. As in:
"Who are you?",
"We are French!",
"Oh, Fa-ra-ng. Please leave at once!"
The term is used quite freely by Westerners in Thailand to describe themselves, but it is a slightly derogatory term that a polite Thai will not use in the company of Westerners. cf. 'Gringo' in Latin America.

The Impossible Dream: In the early 16th Century a boat load of drunken Portuguese sailors came up to Thailand from Malacca to check out the night life. Things haven't changed much in 400 years and the Thais have pretty much got Westerners summed up: they're baboons.

In the face of the impossible, Mr Pumpy, an old Thai hand, is gonna show you how to put your best foot forward in the Land of Smiles.

I am the eggman,
I am the walrus,
I'm a farang! 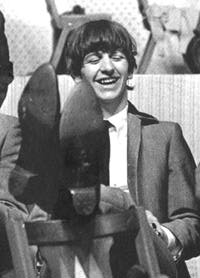 Above: Ringo, a close personal friend
of Mr Pumpy, relaxing in Ko Samui.
What is he doing wrong?

There's no 'best foot' in Thailand, so don't put one forward. Tuck 'em in, be foot conscious.

The Thais have got this 'thing' about feet; they don't like 'em. If you sit in a chair, don't go crossing one leg over the other and waving your foot around in the face of your Thai host; she'll give you the smallest helping of chicken (a sure sign of Thai displeasure). Same applies for sitting on the floor.

If you're a foot fetishist, don't go to Thailand, you'll be very disappointed.

2. Learn how to 'wai' properly and when to use it for maximum effect.

'Wai-ing' is the traditional Thai greeting: keep your back straight, put your palms together in front of your face and bring your head down so your nose nearly touches your fingers, just like the girl in the picture.

But don't over do it! There's no need to 'wai' dogs, children, policemen and Passport Officials. They'll stare back at you blankly like you're some kind of social idiot, which you still obviously are.

3. Take off your shoes inside the house.

However, be 'foot conscious' as in 1, above.

The Thais have got this 'thing' about heads; they're sacred.

Don't go patting kids on the head, but it's OK to pat dogs. However, no Thai in their right mind would pat a dog, so this one's optional.

5. Be extra super-dooper polite to monks.

The Thais approach every monk as if he is the Lord Buddha himself, so act accordingly. Sit in a lower position (the floor's usually a safe bet), don't point your feet and generally act inferior.

Keep in mind that monks are celibate, so if you're female the above applies doubly. Dress conservatively (cover breasts and legs) and never touch them. To be safe, follow the lead of the Thai women; do what they do.

'Spitting the dummy', 'losing the plot' or 'blowing a gasket' is seen as a lack of breeding, and believe me, there's a lot of badly bred Westerners roaming around Thailand.

7. Work at keeping your 'personal space' soft and fluid - especially important for people with a 'chip on the shoulder'.

'I am an individual, I know my rights!'- well, Thailand's gonna challenge this little Western gem.

Try to be easy going. Don't flap your arms about in conversation; quick, aggressive movements make the Thais nervous. Try not to take umbrage at inconveniences but rather work at accommodating others. Be fluid.

Should be a breeze.

Besides just common courtesy there are advantages.

The Thais won't protest at your baboon like behavior, but they'll subtly reward you for showing cultural respect.

Life will actually go better, because the Thais, if they see you're making an effort, will go out of their way to accommodate you.